We do know how important it is to give the voice back to the people on the move themselves. Some individuals we encounter are very open to tell their stories and sometimes we’re able to publish them. Sometimes not. Oftentimes though, due to specifics of the environment in which we meet, there is no space and time to sit and talk for longer. Some people also simply prefer to forget.

Nevertheless, here you can read few testimonies, stories of the people that we’ve met on the polish-belarussian border.

The story of a Daesh victim, who Polish state forces didn’t help and instead deported to Belarus twice.

“When ISIS came to Sinjar in 2014, they also came to our village and wanted to capture us. Some people were fighting.

We had a small car that my family drove to the mountains. I stayed with my brother because there was not enough space. We started on foot to the mountains, but we didn’t make it there then, ISIS captured us, they wanted to kill us all.

They bombed our houses. We escaped. However, ISIS caught me again. I was in captivity for 10 days. Finally, I managed to escape to the mountains. We lived there in tents for 4 years, and since the government wasn’t planning to help us anyway, we decided to go back to our home.

I went with my father and brothers. When I opened the door first, a bomb left there by ISIS exploded in our house. I survived and was taken to hospital. My family returned to the mountains, after all there was no way we could live in our village.

Because the bomb hurt my leg badly, my family decided to send me to Europe to be cured and live there. They sold this piece of land and a small car. I tried to get to Europe legally, to get a visa, but it was not possible, so I decided to go this way, on foot.
It didn’t matter to me if I died on that journey, because I might as well have died in Iraq. 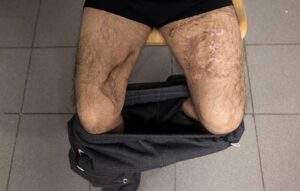 My journey started like this… I flew from Iraq to Syria and then from Syria to Belarus. The police from Belarus caught us in Minsk, took us to the border and said we had to go to Poland. I didn’t want to go, but the policemen pulled out their guns and said they would kill us if we didn’t move, so we had to cross the border.

We tried 2 times to get into Poland, but the soldiers pushed us back to the border. The third time, the police caught us already near the German border and took us to a closed camp, where I stayed for 35 days. The conditions there are very different, but difficult. I don’t think I deserve to be kept in such a place. Then they brought me to an open place because of my health condition.

In Iraq I started to suffer from depression due to our situation. So I took up the fight for a better life. However, I was caught and taken to a closed camp. There are many places in Iraq that may seem quite safe, such as Kurdistan, but our place – Sinjar – there is no life there. People in Sinjar are being killed every day, it is extremely dangerous there. I wish someone could help them, because these people just want to live in peace and follow their religion.

I have reached the point where I am running out of tears to cry. Many of my neighbours, family, friends, children have died. And we have seen it all…

This was not the first time ISIS did this to us. This is the 74th time they have done this to us because we follow a different religion.
(ed. – This number is not an accurate count of attacks on Yezidis. In Yisidic mythology the number 72 means the whole, everything. The term ’72 Ferman’ used by the Yezidis means the totality of persecution, 72 genocides. To the number 72, more are often added; the Sinjar genocide of 2014 is “counted” as the 74th)

But we don’t want anything: no oil, no new country…
We just want to live, and they are taking away our humanity and not allowing us to exist. Now I just want them to accept our existence so that I can live among my people.”

Sinjar (Shengal/Sinjar/Şengal) is a region in northwestern Iraq; the so-called Iraqi homeland of the Yezidis.

Since then Sinjar, despite the gradual recapture of the region from the hands of Daesh by Yezidi and Kurdish self-defence forces (HPG and YJA-STAR, YPG and YPJ units), has been continuously attacked by Turkey (also as early as 2022). The Turkish state uses as a pretext the fight against terrorism, for which it considers the existence of the Sinjar self-defence units. Realistically, this is the realisation of Turkey’s imperialist inclinations – the desire to have Sinjar under control. These actions also actively support ISIS and its dormant or isolated cells in the region. And all this in the absence of a NATO response.

A series of bombing raids, the assassination of members of the Sinjar self-defence forces, drone attacks, the murder of people who embody the ideas of democratic confederalism, the destruction of homes or hospitals… These are the realities of the Sinjar region. This makes it impossible for the inhabitants to return home. It is also from the mountains and refugee camps there that the Yezidis decide to make their way to Europe.