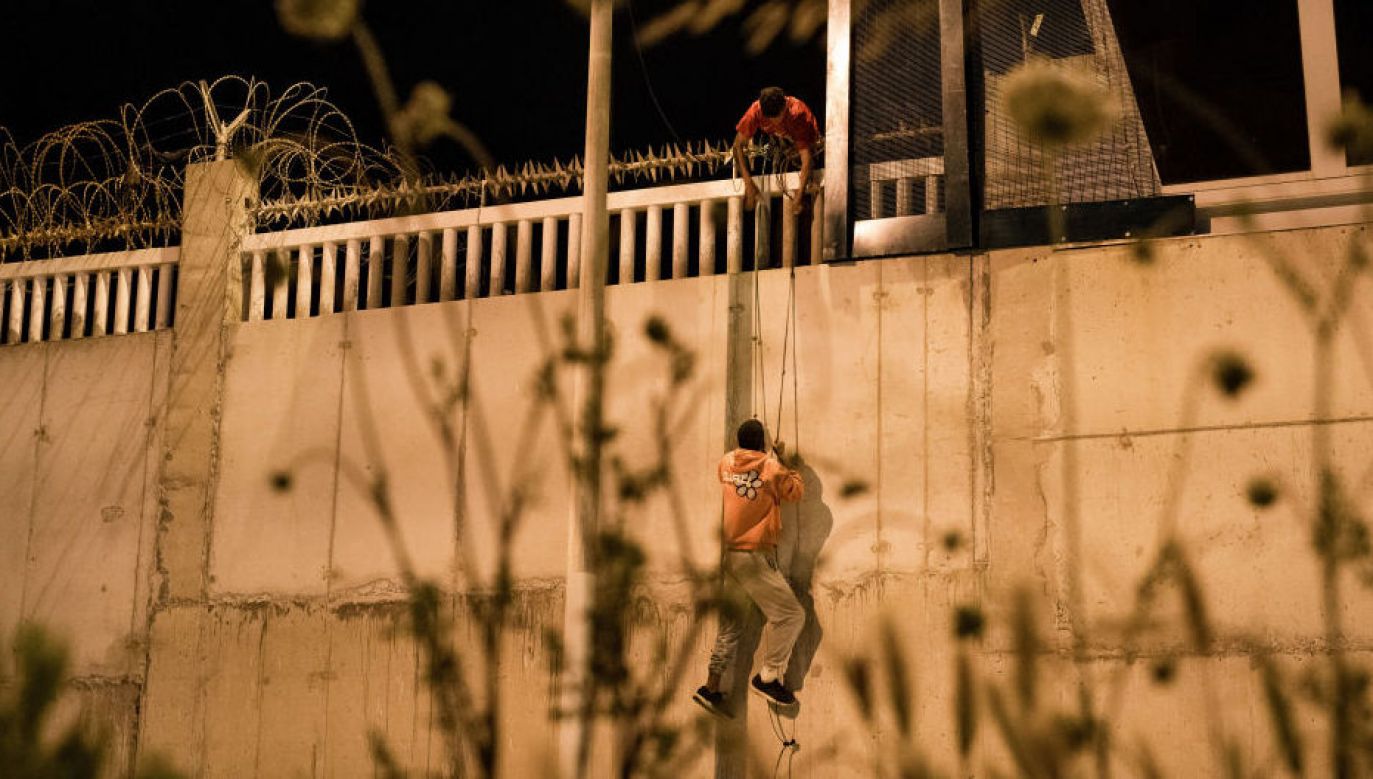 Walls, or how Poland joined the use of criminal methods for border protection

The building of walls is becoming an increasingly common phenomenon, and countries in all regions of the world separate themselves by barriers from their neighbors, explaining such behavior with the need to protect borders. However, in order for such a barrier to be created, it is necessary to have an agreement between two countries, which under the norms of international law must ratify the division of land and the designation of the so-called demarcation line. The construction of such a fence must be the result of the consent of both parties. Although in reality, of course, this is not always the case.

In 2015, when the Hungarian government was preparing laws to create a border sluice as soon as possible, Serbian Prime Minister Aleksandar Vucsichi said with indignation that his country will not build walls, will not close itself off, and “will not live in Auschwitz”. However, the situation changed in 2020 when Serbia began erecting a wire fence on the border with North Macedonia near Preševo.

Building walls is purely an independent decision of individual countries. It is often accepted internationally, including by the citizens of a given country. It depends on the degree of fascization of a country and the social and political moods prevailing at the time of the proposal to build such fences. Moods which are appropriately created by the ruling class.

Walls don’t come off well and are troublesome in terms of image. This is why the European Union is ready to allocate huge funds for specialist equipment to prevent border crossings, such as drones, sensors, and border guard gear, but is reluctant to finance the construction of walls. However, this does not change the fact that such an act is to its advantage when it is done by someone else, in this case by Poland. Therefore, despite the enormous ecological damage accompanying this investment and its totalitarian nature, the EU does not undertake any real pressure on countries which decide to build such walls. On the same principle, it pays neighbouring countries, such as Turkey or Morocco, for using brutal methods to stop migration, which it is unable to use in its own borders due to its declared respect for human rights.

It is of course a well-known fact that people have always migrated, migration is the most natural human process and it would be easier to stop the Danube than the phenomenon of migration.

The development of technology supports the migration processes. However, it also helps to seal the borders even without putting up a physical structure – through electronic surveillance and warning systems. The most popular methods still include erecting electric fences, barriers made of steel and reinforced concrete panels or barbed wire. A special barrier will be built along the Polish-Belarusian border after the government prepared a bill, President Andrzej Duda signed it, and the legislation came into force. Poland has not asked Belarus for permission to build the fence and has not ratified any bilateral agreements. However, it does not seem realistic that the walls will make people abandon their plans to migrate along this section. Although the wall will certainly add to the danger of loss of life or health when people attempt to cross it.

Walls as a system of control

Building and improving the border control system is aimed at controlling the free movement of people around the world. Putting it up does not require much hassle, because there is always money for issues concerning national security, after all. The construction of walls around the world is most often explained by the desire to protect citizens of a given country from terrorism, smuggling, poaching and, of course, migration. Naturally, not all citizens of Poland, as well as not all citizens of other countries concerned with this issue, are in favor of building such walls. But let’s not hide – no borders movements still have fewer fans than the defenders of borders, even if, fortunately, that is slowly changing. For example, emigration of Hungarians or Poles for economic reasons is usually passed over in political debates and also completely suppressed among the citizens of a given country. In a situation put this way, the socially imposed narrative of “migrants wanting to take jobs and live on welfare” is completely incomprehensible.

Seemingly, this does not matter when discussing the context of the wall’s construction, but only seemingly. It is also the social narrative that gives consent to successive governments to move forward with more and more ideas of fortifying the so-called Fortress Europe, which has unfortunately been joined by Poland, so far being on the sidelines of such events. What is more, it has found itself in the very center of current migration events and is being closely watched. According to the announcement, on 25.01.2022, the first stage of construction of the wall between Poland and Belarus began, aiming to replace the concertina wire fence put up in the summer.

The European Commission does not encourage, but also does not prevent the building of walls.

The European Union officially states that it does not finance the construction of fences, and the funds that member countries receive can be spent on border protection, technical equipment, and the construction of reception centers. Greece and Spain applied for funds to build a fence, but were denied. The Union also did not fund a wall on the Bulgarian-Turkish border. Poland, Lithuania, and Latvia have applied to the EU for reimbursement for the construction of barriers and fences, but have also been rejected.

The biggest boom in putting up barriers was in 2015, when the European Union was put to a real test of humanity. The balance is five new Fortress Europe fortification sites on the so-called Balkan route. All in order to stop people with refugee experiences from Syria after the fall of Aleppo. This time was marked by strong political upheavals, a real test for civil societies and ordinary people whose homes crossed the migratory routes.

Today we have a similar situation, although on an incomparably smaller scale, in Poland, Lithuania, and Latvia. These countries strongly distanced themselves from the events of 2015 and blocked attempts to relocate people with refugee experiences. The European Union neither had strong tools to manage migration at the time, nor had it established constructive strategies to date. Its member states are still effectively blocking and not participating in relocation. And that also includes Poland.

When pushbacks began appearing on the Polish-Belarusian border in the summer, it was clear to many that we have an obligation to comply with ratified international agreements regarding people with refugee experience. However, it soon became apparent that Poland had not only rejected these treaties, but had also enacted its own internal law legalizing pushbacks, which officially (and only officially) is an illegal action. The European Union has condemned the actions of the Polish and Lithuanian governments on illegal pushbacks.

This is the pinnacle of hypocrisy, because we know very well that it has been quietly allowing human rights violations on a massive scale for many years on the external borders of the Union, on the so-called Balkan route, in Italy, Spain and Malta, and from 2020 quite officially in Greece. Croatia is also one of those countries that have become notorious for exceptional brutality towards people trying to cross its borders in an unregulated manner. From our experience while working on the Polish-Belarusian border, it seems that Poles are in no way inferior to them…

During all these actions of individual states, the only solution of the European Union seems to be the establishment of Eurosur- European Border Surveillance System, that is, the establishment of a common technical framework for action in three phases. Its main purpose is to support member countries in their efforts to reduce irregular migration.

Fortification means huge profits and a cake shared between governments and private companies.

Consent to the maximization of resources allocated to fortifications in individual countries is usually associated with the same thing – creating a sense of external threat, fear of terrorism (especially exaggerated by politicians and the media). Above all, however, all kinds of fortification are simply set against humanity, they are anti-immigration.

The rise of anti-immigrant sentiment is the perfect excuse to plan, build and reinforce fences. It involves all sorts of business, big money and power. Simply building a wall is not enough. To realize its full potential it must have countless electronics and human resources to operate them. New technologies are provided to the state by companies that make millions in profits from operating the fortifications.

Human migration is one of the best businesses for the state. For example, in Turkey, in almost every seaside store you can buy a life jacket, which apart from looking similar to a life jacket is rather a makeshift copy of it. A person who finds himself in danger at sea while crossing from Turkey to Greece by dinghy and has only the vest bought there for protection has very little chance of survival. So why doesn’t Turkey ban the sale of such vests knowing that they can lead to death? The answer is simple – Turkey earns huge money on this practice. Just like big companies make money on providing new technology, despite the fact that using it is highly unethical.

We can and should block the creation of dams and entanglements, and we can express our opposition to these practices. We can take concerted action and try to block the delivery of the various components necessary for the creation of a fence, and inform the public about the actions of those companies that make money from strengthening borders unethically and against humanity.

People have migrated, are migrating and will continue to do so regardless of the height of the fence erected. Nevertheless, it very often poses a threat to humans when they attempt to push through it. The countless deaths on the Spanish-Moroccan border in the enclaves of Ceuta and Melilla are a prime example.

We can try to trace what objectives guided the creation of fences in different parts of the world over the last few decades. Leaving aside, of course, the most famous Berlin Wall, which was built in 1961 and dismantled in 1989, we can go on with:

These are the official reasons for building dams, walls, fences, entanglements and often electric surveillance systems along national borders. We have much more to say about them – they are products of (neo)colonialism, occupation, racial and class segregation, serving the control and enrichment of those who finance them and the arms industry. They are the products of exploitation, death, and the business of smugglers and human traffickers.

As humanity we are currently facing many problems.

Global warming, deliberate destabilization of strategically located resource-rich countries, wars, the rise of new authoritarian regimes… Militarization and maintenance of the political status quo will only exacerbate these problems, and wars and their devastating effects will begin to affect a growing portion of the population.

Walls and strengthening the border regime, dividing humanity into first and second class citizens, will not keep us safe.
It is just another step into the abyss…